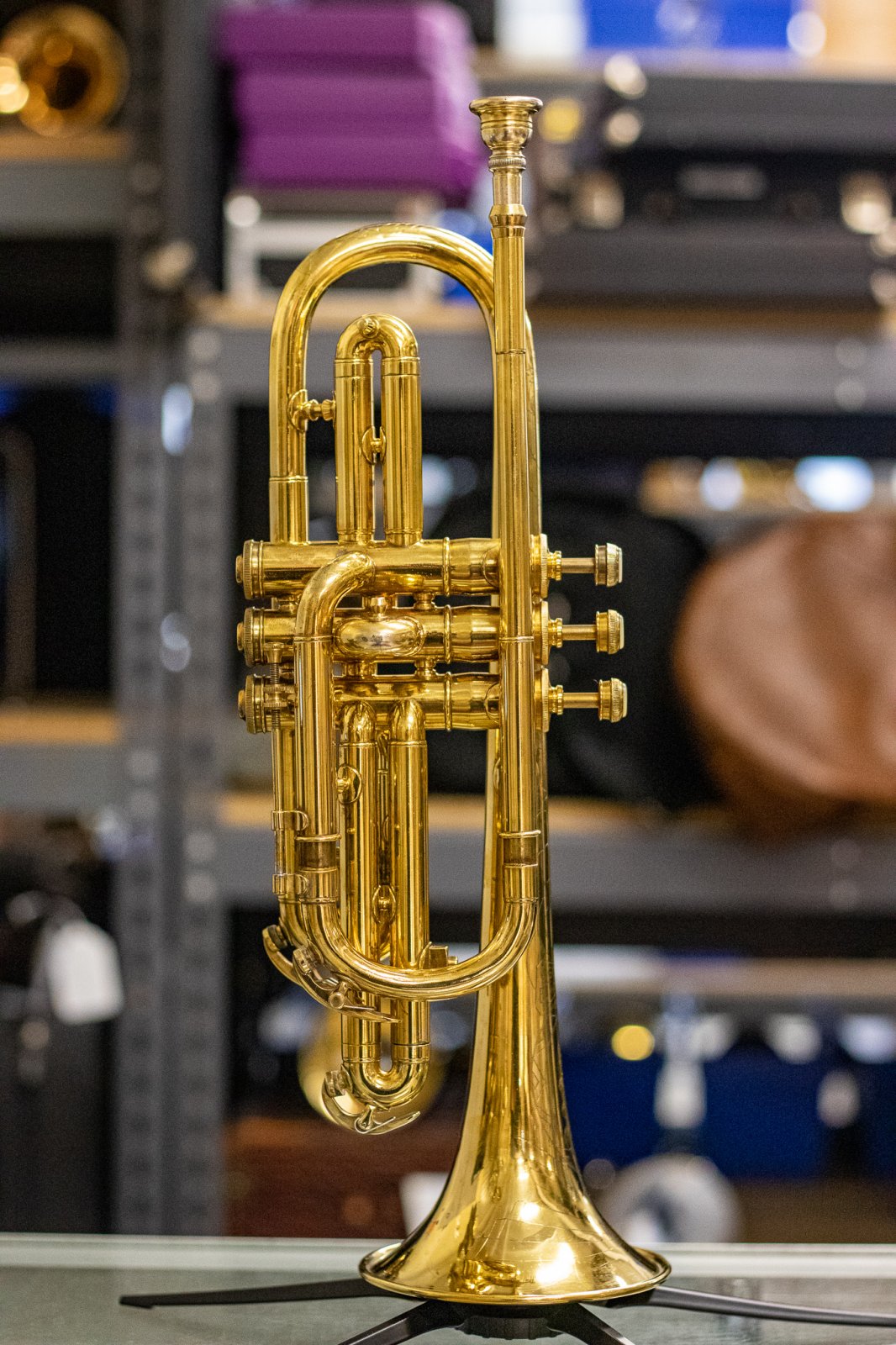 From the Conn Loyalist:

Notice the art-deco engraving on the bell. The unusual mouthpiece is original and correct. Before WW2, "Director" instruments were considered professional models. Notice that this instrument doesn't have a finger hook on the leadpipe. The absence of the finger hook was common in the 1920's and early 1930's. Also notice that the configuration of the tubing on this 26A Director is essentially the same as the 14A, 15A, 17A and 18A Directors of the 1950's and 1960's. Also note that the configuration of the 26A is of similar design as the 20A Fluegelhorn. It has been suggested that the 26A was a development of that early model 20A fluegelhorn. I have also been told that the early 26A's played substantially different from the later model 26A's with the early ones being more similar to that early 20A. The 26A Director was produced between at least 1930 and 1940.

The C.G. Conn LTD. company applied for a patent for the design of this cornet on December 18, 1931, patent number 1,905,141. The patent application reads, in part: "It is an object of the invention to improve the construction of this type of instrument by arranging certain parts thereof in relation to others in such manner as to facilitate the holding of the instrument while it is being played, and also to facilitate the operation of the various valves while it is being held." The patent also has a knob and screw mechanism similar to the opera glass tuning slide of the 80A, but in this case attached to the slide coming out of the third valve running into the bell. Contrary to what I had said here previously, it appears that the 26A does indeed have that mechanism.

What Conn said in 1937:
The 26A was developed to meet the demand for a more typical cornet - short in length, compact in design and having a more characteristic "cornet" tone. The bore is large with a large throat bell, giving it "genuine" cornet tone - round, full, sonorous and mellow. Special attention has been given to the comfort of holding. This feature, always a problem on short model cornets, has been taken care of by allowing a good hand grip on the valves below the mouthpipe and bell. Patented tuning wheel similar to the one made famous on the Victor. Built in Bb and A, Clickless Crysteel valves.