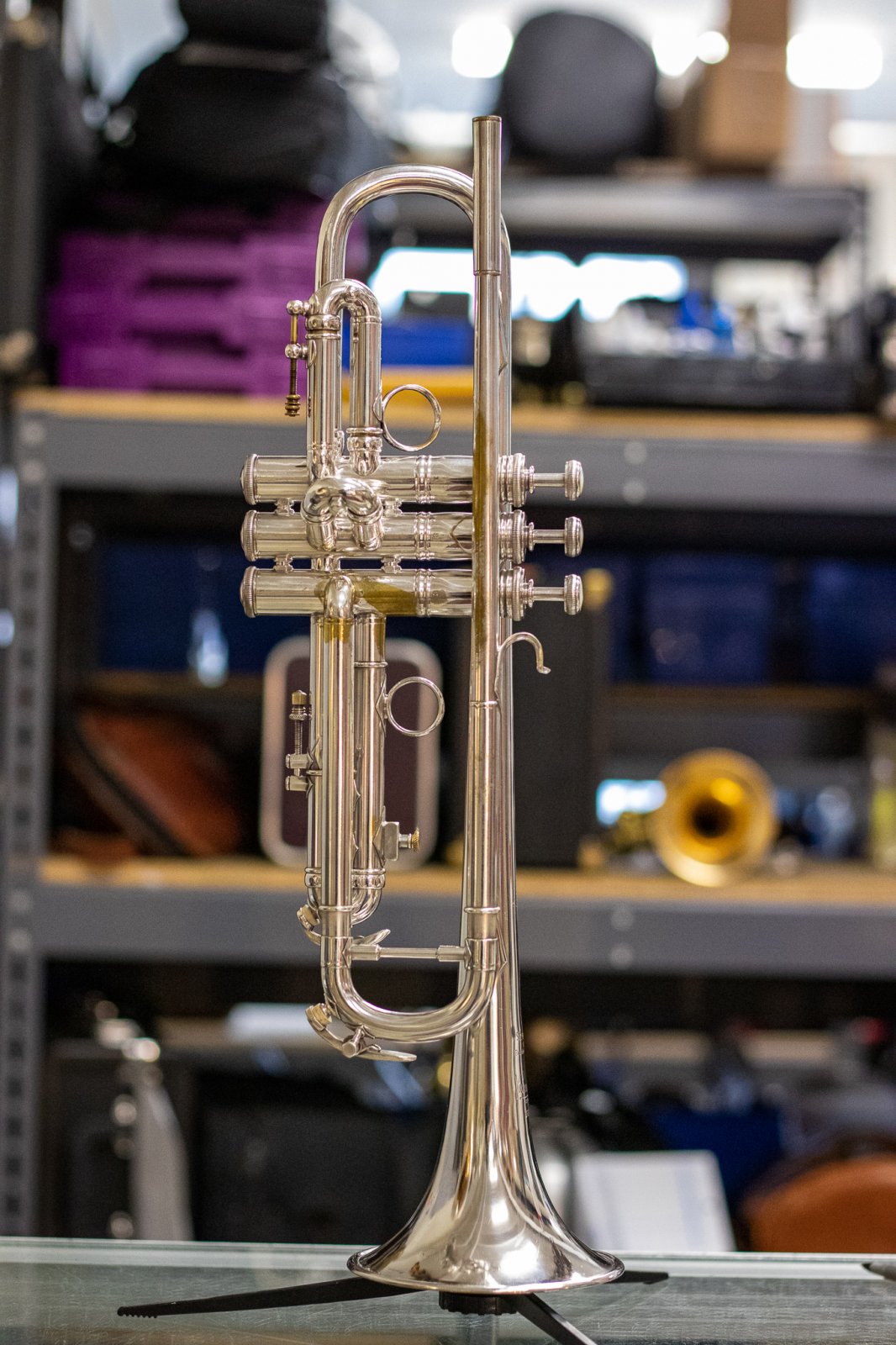 From the Estate of Max Schlossberg!


Max Schlossberg (1873 - 1936), member of the New York Philharmonic trumpet section from 1910 and 1936 and the founder of the American School of trumpet playing.

Notes from Josh Landress on this trumpet: When looking at the shop card, you can make out that this trumpet was hand selected for Max Schlossberg by Harry Glantz at the Bach factory in New York! This trumpet is interesting because that it has installed a stock pre-war French Besson mouthpiece receiver (instead of the stock Bach reciever), Besson 1st valve stop rod, Bach 3rd valve stop rod, and added 1st valve thumb ring. All of these accessories would not have been stock from Bach at the time this horn was produced. There is one patch on the lower leg of the main tuning slide going into the 3rd valve and it has been replated at one point, while in the possession of Max Schlossberg.

Schlossberg the student:
At age 9 he went to Moscow to join with his elder brother Joseph. In the biography in Daily Drills, it mentions the names of the professors at the Moscow Conservatory: Marquard, Putkammer and Adolph Sauer.

In 1889 Schlossberg moved to St. Petersburg and met Victor Ewald and Wilhelm Wurm.

Later he studied in Berlin with Julius Kosleck (1825-1905) - sometime between 1889 and 1894. He toured under Arthur Nikisch, Hans Richter and Felix Weingartner.

Schlossberg the musician:
In 1897 and 1898 he was bandmaster of the 171th Regiment in Riga and conducted at the Russian Club Theatre.
The first years in New York he supported himself as a free-lancer playing in park bands and at weddings. He also played with the Goldman Band in their summer concert series.

Between 1910 and 1936 Schlossberg was a member of the New York Philharmonic trumpet section.

Schlossberg the teacher:
Schlossberg has by many been called the Founder of the American Schools of Trumpet Playing.

In his book East Meets West, Edward H. Tarr has described how Schlossberg brought the trumpet tradition from the East (Russia and Germany) to USA. Tarr also stated the following:

"Max Schlossberg became the master teacher of his time. Virtually all the professional players of the following generation studied with him at one time or another."  (page 231)

In an article about William Vacchiano (ITG Journal, May 1995, page 11 - 13) there is a section called Studies with Max Schlossberg:

Schlossberg lived on the fifth floor corner apartment of 811 Walton Avenue in The Bronx, in the block situated between Yankee Stadium and The Bronx County Court House, both of which are visible from the corner of the street intersection overlooked by his studio. The Schlossberg apartment was entered at the front of a long hall. Students were usually greeted by Mrs. Schlossberg, Jenny (1879-1947).
On either side of the long hall following the entrance to the apartment were several doors opening into their respective rooms. The teaching studio was at the end of the hall facing directly the main entrance to the apartment. There was a small anteroom in which students arriving early deposited their belongings, and in which they and their parents could wait. The studio was placed at the external corner of the exterior of the building, as far from the general living quarters of the Schlossberg neighbors as was possible.

The studio was a square room (3 m X 3 m). The walls were covered with photos of trumpet players. Schlossberg taught sitting at the right and behind the student. By this he would evaluate the student based on what he heard and not what he saw. His teaching was founded on 3 methods, Arban, Saint-Jacome and Sachse. For each student he would write exercises almost like a doctor prescribing medicine. The drills he wrote were mostly based on orchestral repertoire. Some of the drills and exercises were later compiled by Harry Freistadt.

Soon after his arrivals to America, he became a member of the Institute of Musical Art (IMA) and later the Julliard Graduate School. Almost all his teaching was from his home studio.

Some of his students: